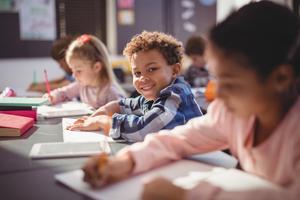 Summit Academy in Bluffdale has developed a “wave schedule” for students.

Students that learn a second language, specifically in a school immersion program, have shown to perform better academically across the board. This includes testing and have better divergent thinking, pattern recognition and problem solving. The program is rigorous and prepares the students to become Spanish English speakers. Not only will they be bilingual, but they are also developing cross-cultural competency and will find a cultural sensitivity. The experience has created students who have a more positive attitude towards different cultures and appreciation for people who might be different than them.

Teachers, Laura Giraldo and Toryn Coombs both work on this program at Summit Academy. Laura said “They try to keep the classes upbeat and colorful, so students are excited and comfortable about learning. Students must be actively participating to be successful in learning language, especially in Spanish. We do this buy using music, movement, pictures and sign language.”

Toryn acknowledged that parents play a big part in the success of each student by getting involved and taking an interest in the program. “At the beginning of the year, it is a little bit tough. The kids walk into the Spanish class and only hear Spanish from the teacher. This can be scary and overwhelming for a 6–7-year-old. However, in a few short weeks, our students are singing and learning in Spanish. It is a wonder thing to witness and such an accomplishment for each student.”

Laura Giraldo is from Merida Venezuela. She has a bachelor’s degree in Language Arts and a master’s degree in higher education. She has been doing Dual Immersion for five years. She loves teaching First Grade as she feels they are eager to learn and are not afraid of making mistakes, which is why they learn so quickly.

Toryn Coombs is from California and has been with Summit Academy for over 3 years now. This is her first year in the Dual Immersion. She has been “playing teacher” since she was a young child and knew that one day, she would be working with kids.